Comments Off on raspberry pi Posted by itjerk on June 1, 2012

Cheap computing's had a lot of promises for machines under $100. The Raspberry Pi, designed by the British not-for-profit foundation of the same name, is a "single computer on a board" that features an ARM processor and high-quality graphics, all for USD$35.00. It's designed to interest kids in computer programming, science, etc. Engadget has a rather tepid review here. 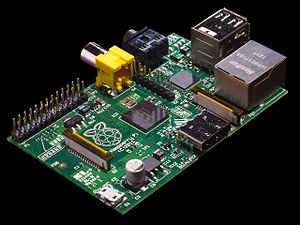 The unit is the size of a credit card, and has connections for USB, Ethernet, SD card (required for booting), HDMI (audio and video), RCA video and a 3.5mm audio jack. It's ARM, so software needs to be compiled for that processor; both Debian and Fedora have been ported, so yes, it's ostensibly a Linux box. It also has a GPIO connector, which means it can also be programmed to do about anything (robotics, interfacing, etc). The unit is powered by 5v, and most any micro-usb charger will do.

To get the Pi running, you'll need a pre-loaded OS on an SD card, connect (wired or wireless) keyboard and mouse, hook up to video via HDMI or composite, and power it with 5v via micro-usb.

I got into the queue with RS Online (one of two exclusive distributors) to order one on March 1st, and actually placed my order on May 24th. Next update when it's in my hands!