audio bliss with the piCorePlayer + HiFiBerry

Comments Off on audio bliss with the piCorePlayer + HiFiBerry Posted by itjerk on September 30, 2015

If one thing has changed in the past forty years of my listening to music, it’s not the music; as Lemmy said in his documentary, (to paraphrase) “you always return to the music of your youth because that’s when you figured out what music you like”. What has changed is how I listen to music; as much as I still enjoy flipping a vinyl record over (and that delicious analogue sound), nothing beats the convenience of digital streaming. Basically, I want all my music on a computer so I can access it, with a click, wherever I may be.

Not like any of this is new. Since the iTunes revolution, music has been reduced to ones and zeros, in more ways than one. The album has vanished, and CDs are mere content delivery units. Services such as Spotify, Pandora, Google Music, Amazon Prime, iTunes Airplay, etc… are the new record stores, serving and predicting what music one wants to hear. Their respective apps, and devices such as Sonos, Beep, Amazon Echo, and the newly announced Chromecast Audio are all there to push that music your way.

But I want my music, the music on my computer. Logitech Media Server, aka SlimServer or Squeezebox Server, has been my go-to for music streaming for probably a decade now. Problem is Logitech stopped making Squeezeboxes years ago. Beep seemed like a nice substitute, but honestly it mostly crashes, far too often to be considered usable. 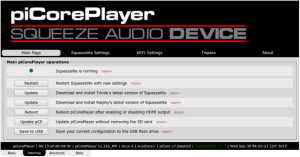 The most elegant and inexpensive solution is the Raspberry Pi equipped with a HiFiBerry DAC running piCorePlayer. The latter has made some serious leaps in the past year in terms of usability and stability, and with the addition of the HifiBerry, sonically as well. So all of this is a long winded way of giving the trio another, hopefully louder shout-out for earning the top spot in my hifi rig. It works, it’s simple and it sounds fantastic. Thank you!

On the web:
piCorePlayer