Remember minidiscs? To start, you'd have to dive back in time to the pre-iPod era, perhaps reaching as far back as a time before MP3s! Sony introduced the format in 1992 as an alternative to the cassette; minidiscs offered "digital" recording to a magneto-optical disc. Using an encoding technique called ATRAC, "an audio coding system based on psychoacoustic principles", it was one of the first lossy formats, but one that delivered both CD quality sound and convenience. The discs were indeed small and with compression held about 80 minutes of music – the same as a CD. But to make a long story short, the minidisc never really caught on (though musicians did (still do?) appreciate the portability and quality), and by 2000 both the format – and the players – were destined for the audio dustbin. 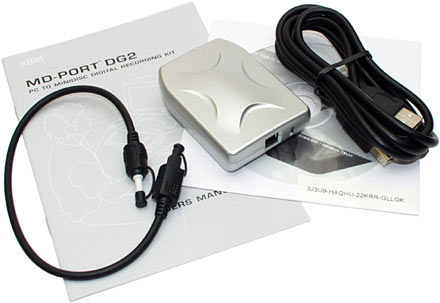 Somewhere along the way a company named Xitel developed a line of products to bridge the computer / audio equipment divide. Introduced in 2001, the DG-2 was a USB audio device that offered digital output for use with a Minidisc recorder – hence the name "MD Port". It saw a few hardware revisions, but basically did one thing: converted USB audio to optical S/PDIF via TOSLINK so you could keep everything digital when recording to minidisc. Xitel also made an analog device, the AN1, that converted USB audio to analog via a stereo miniplug. The AN1 is still available from Xitel (it's now called the "MP3 Streamer"), but for the DG2, just search eBay and you can find one of a dozen vendors selling it for as low as US$12.

Now, what's this got to do with anything? Well, the DG2 gives me the ability to send audio from my computer – in pure digital form – to the superior digital-to-analog converters of that newly-purchased surround-sound receiver of mine. No larger than an iPod, the DG2 uses a controller at 16-bit 44.kHz to work it's wonder, converting the ones and zeros from the USB input on the computer side to optical TOSLINK on the output side. It's an inexpensive, plug-n-play way to get digital audio from almost any computer that supports USB audio. Thanks Xitel! Be sure to check out the detailed review of the device at Dan's Data (link below and thanks for the pix).

On the Web:
Xitel
Dan's Data review of the DG2 and AN1
Xitel at Minidisc.org